Have you noticed the silhouette of a lion in the logo of the Hong Kong Tourism Board?  It is the Lion Rock, a remarkable landmark of Kowloon Peninsula.  This is also the first spot of our Seeking Nine Dragons activity.  The Lion Rock is 495 m in height, consists of granite covered sparsely by shrubs. It is an extension of Kunlun Mountains.  It was named as "Tiger Head Mountain" during Qing Dynasty (1644-1912). Due to rezoning, its name was mixed up with the "Lion Mountain" nearby.  The area was hence named the Lion Rock.

The Lion Rock is a key landmark dividing Kowloon and the New Territory geographically.  You can see this crouching lion almost everywhere in east Kowloon area.  Having said that, by the end of Twentieth Century, not many people showed their concern about the area in the vicinity to the Lion Rock, where squatter area and public housing concentrated. People only considered the Peak, which represented the miraculous development of the Hong Kong economy, as the city's symbol.

In 2002, Hong Kong was adversely affected by economic downturn.  The then Financial Secretary Mr. Antony Leung proposed a series of austerity measures.  To dilute the negative sentiment among the public, he quoted the lyric "on the same boat" from the theme song of "Below the Lion Rock".  This drama was produced by the Radio and Television Hong Kong telling stories of the grassroot living there.  Since there were a number of celebrities grew up there, our government further elaborated the persistent practice and industrious effort made to move upward as "Spirit of Lion Rock", and made it an icon of Hong Kong.  That's why you can see the Lion Rock is co-branding with the Flying Dragon in the Tourism Board's logo. 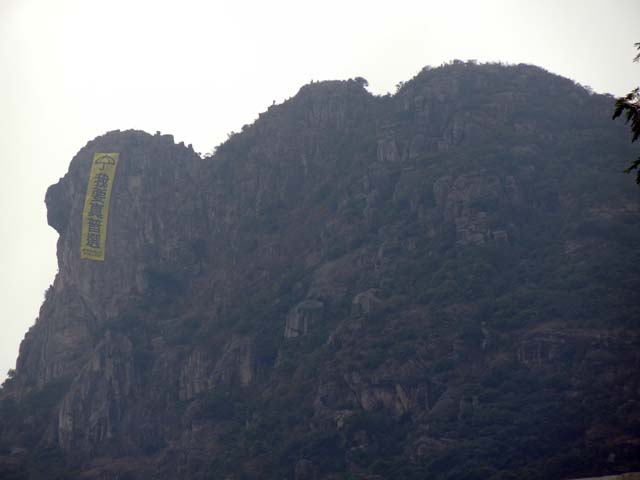